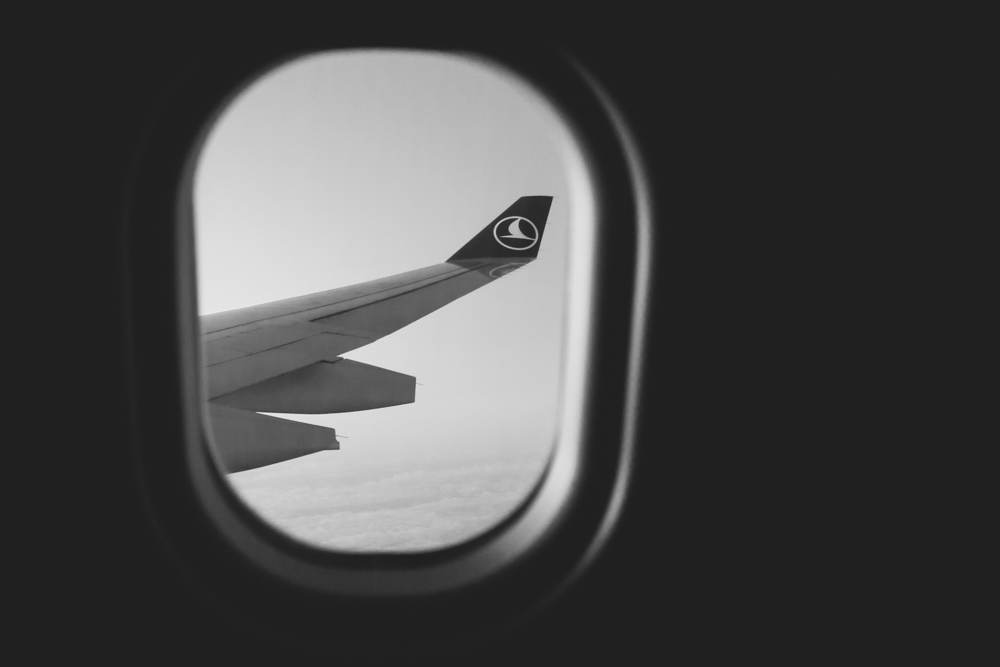 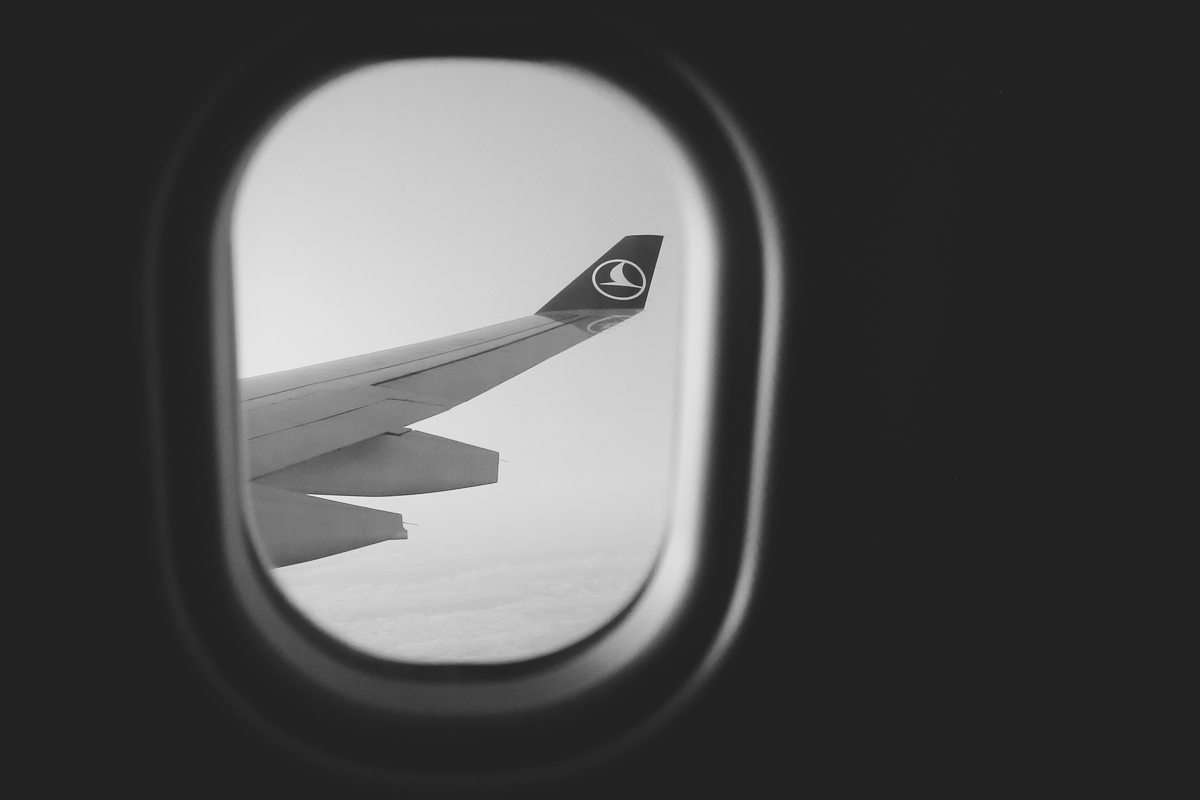 Nick and I love aviation. We go to airshows, know what types of commercial planes airlines fly, and frequent a local DC park that’s top-notch for plane spotting. I have my dad to blame for my love of aviation; he is an Air Force vet and has worked for the Federal Aviation Administration for nearly 20 years. For our wedding, I bought Nick a flight lesson and he had the opportunity to fly a little Cessna with me in tow. You get the picture – we dig flying.

Needless to say, we had high hopes for our 10 hour flight to Istanbul on Turkish Airlines to begin our 2 week Turkey trip. Reviews for Turkish Airlines were glowing, even from my coworkers who had recently made the trek. Everyone said good service, very comfortable, and most of all, excellent food. Our late night arrival at Dulles started off with a crazy amount of international travelers at the Turkish Airlines check-in speaking a multitude of languages. Stepping onto the flight, things seemed promising; we were handed little travel kits complete with an eye mask, lip balm, toothbrush and toothpaste, earplugs, and no-grip socks. In our seats were a lightweight blanket, pillow, headphones, and slippers and our seats were equipped with full entertainment centers – movies galore. I did an obvious once-over as we were taking our seats – middle of the plane, lavatories two rows up, 2 infants one row up in the center, a “talker” in front of us, teenagers as part of a group behind us. Things seemed iffy…if only those babies could keep quiet. After take-off, we received our first treat from Turkish Airlines; lokum, or Turkish Delight, a small gel and sugar-based treat this time filled with pistachios. Awesome – maybe this would work out after all! And then, the smells began.

The usual, ya know; body odor, a baby’s soiled diaper, someone’s flagellation. I was using my blanket to cover my nose hoping it would all pass, and of course I wouldn’t smell it once I fell asleep. (Did I mention that the newer Airbus 330s don’t have in-seat temperature control? Ya know, the little air stream you can control at your seat? If you’ve ever been on a flight and been annoyed by this feature, I assure you, you should be thanking the high heavens for it next time.) An hour in, I got a brief whiff of something potent – vomit, I thought. Or maybe I was imagining it. But just as quick as I smelled it, I saw the teenager that was sitting behind us dart up the aisle, vomit dripping down his arm. I hit Nick’s arm quickly, warning him and turning over my shoulder to check the damage. Sure enough, small pieces of vomit were oozing on the top of my seat. I began frantically checking my hair, Nick’s arm, my arm. I immediately felt nauseous.

The teen’s teacher/chaperon entered the aisle, speaking to the other student that was seated next to the vomiting teen. She moved the other young teen to the middle aisle seat, switching seats with him, and began attempting to “clean up” the mess with basic paper towels from the bathroom. Later we would find out that the teacher was traveling with 5 students (middle school, maybe – age 13-14) to Germany via Istanbul for a German class project. Meanwhile, our “vomiter” was locked in the lavatory. Just as well. If I saw any more vomit, I was definitely going to hurl. Hard telling how long he was in there – seriously, the longer the better. The teacher brought him a new t-shirt and kept knocking on the door of the lavatory, speaking loudly. She supposedly tried to inform the crew about the vomit. After probably 45min to an hour later, I pointedly asked her if she was going to do anything about the vomit everywhere (it was still on the floor of the aisle, right new to my seat) and the smell and she informed me that the crew knew and would help clean it soon.

Then, they began dinner service. Kill me now. That’s all you want in life, right? The smell and sight of vomit while you’re chowing down on an actually decent airline chicken breast. The crew was cruising down the aisle for dinner service like nothing was wrong – like they couldn’t smell or see the mess. Our teacher friend, in the meantime, had decided the mess was too much for her to be able to take up locale in the seat next to the vomit – obviously the solution was to conveniently position herself in the take-off/landing flight attendant seat two rows up, for the remainder of the flight I might add.

After dinner, our friend managed to make it out of the lavatory. This is when I finally had a chance to get a good look at him – maybe 13 years old, pathetic puberty ‘stache sparsely growing, awful acne, overall poor hygiene. The lovely scent as he walked pass was just too much. I’m lucky I was able to keep my food down the entire flight. The teacher begins her loud lecture: “Ryan, do you think this is the sickness your dad had, or maybe motion sickness? Have you flown before? Has this ever happened? Now, no foods or anything until you’re feeling better – just water. And here’s the bag – use the bag when you’re feeling sick again.” So reassuring.  She retreats to her seat. After a couple passes from the flight crew with no aid in the mess clean up or smell issue, I finally stop them and ask for help. Flight’s full, no seats available, the gorgeous attendant with poor English tells me when I ask if someone will be cleaning it up replies with “Oh! I cannot!” She says, “I will help you.” Which obviously I was skeptically about – you can’t move us and you can’t clean up the mess, but you can “help me?” Right. She returns 45min later with perfume spray. I use the blanket to create a barricade between us and our friend “Ryan.” I pray the vomit is a one time deal…

Then I hear it. *Cough* *COUGH* I lean forward and instruct Nick to do the same, and I look back. Ryan has flipped off his stylish (sarcasm here) bucket hat and is hurling into it. Fabulous. Now I’ve witnessed the vomit. Just perfect. Teacher to the rescue. She escorts Ryan to the bathroom and begins her method of damage control. Ineffective, clearly. We see some vomit on the wall next to Nick – thank God for Wet Wipes! We began sanitizing everything directly around us, praying whatever this kid had was NOT contagious. He set up camp in the lavatory for an unknown amount of time again. Maybe hours this time. Didn’t matter. The smell was still wretched, the perfume spray smelled like bug repellent, and the plane was hotter than a flipping sauna. Despite chugging water and exercising our legs, our feet looked like Cabbage Patch kids’ feet. And needless to say, we weren’t getting any sleep.

He appeared again. This time, I thought, he has to be done. Over half-way into the flight and I had high hopes for the remainder of our trip. The babies had been angels. They had slept most of the flight – the airlines have these bassinets that attach to and hang from the exit row wall in the middle. Brilliant. Our “talker” had only suckered me into a 30min convo once, mainly to inform me of all of the places in the world he had traveled. The teacher was all cozy and snug in her new seat, reading. (If she fell asleep, I was going to have to go punch her.) We had been opting to make trips to the lavatories at the back of the plane to avoid the vomit stalls. Which was brilliant because during one of the flight attendant’s rounds, she poked her head into Ryan’s little vomit camp stall to clean up and replace paper, etc., only to immediately retreat with a look of disgust and lock the door from the outside. The stall remained that way for the rest of the flight.

By the time our “breakfast” came, just an hour and a half before landing, I was feeling a little better. Light at the end of the tunnel – temperature was cooling off, lights were up, our friend Ryan had only gotten sick once more and appeared to have made it to the (other) lavatory this time. Food was great, and I was desperate to get off of that plane.

We landed in Istanbul and darted out of our seats. They exited the 280-person flight (where only one person was vomiting, I might add)  from the front and the back of the plane. As we were leaving via the back of the plane, walking down the aisle, now behind Ryan, I couldn’t help but notice that he had that hideous bucket hat back on…

The good news: Istanbul was worth every second of that 10 1/2 hour flight from hell.

And rest assured – I have a nice customer complaint on file with Turkish Airlines. We’ll see if anything comes of it. Though they did almost redeem themselves on our awesome flight back to DC. =) 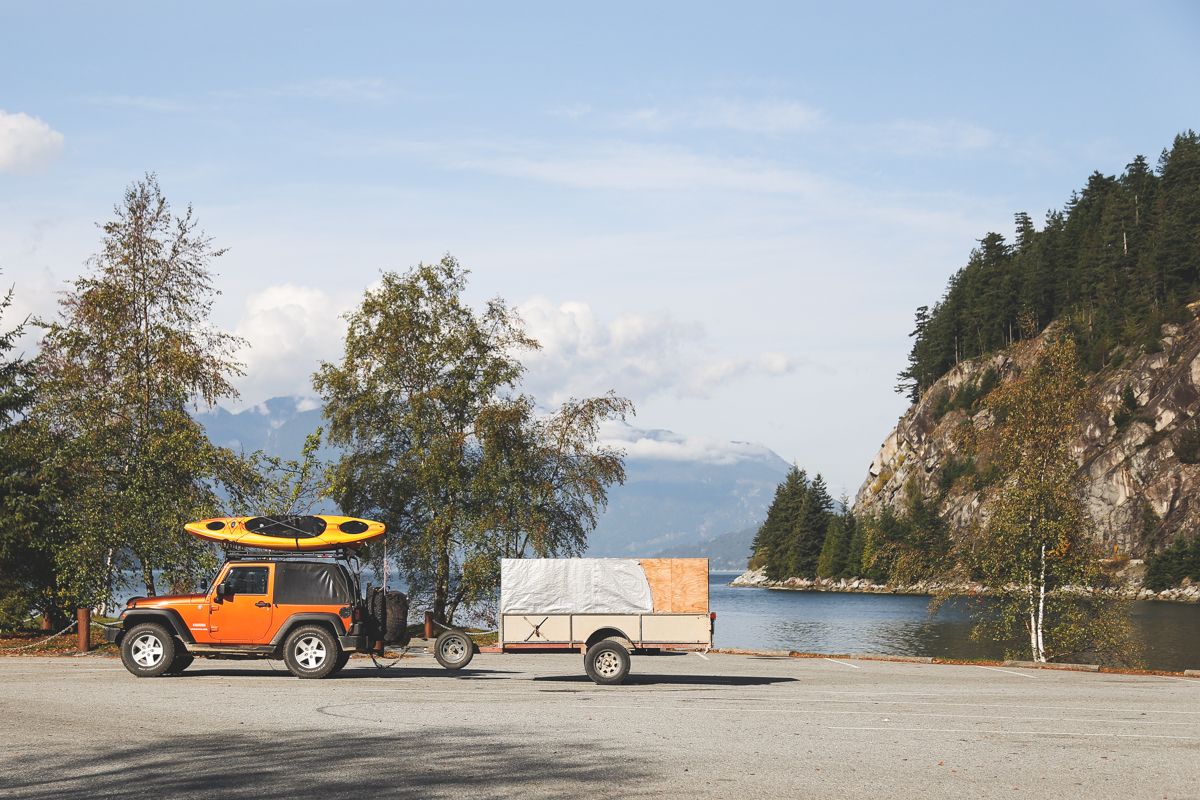 I think this snuggly girl has been pretty kind to

Last month we refreshed the dining room and it fee

Realized I didn’t give myself credit in yesterda